skip to main | skip to sidebar

4/24
I participated in the running class by NYRR as usual.
The menu of the day was 6 x 0.25mile at a dirt track on the top of the Great Hill of the Central Park.

I joined 8'00"-to-8'30"-per-mile-in-5K-race gruop that evening. That pace was slower by two minutes than usual group.
I don't need a speed work with the NY marathon 5days ahead.

Run for the Parks 4mile

A beautiful and hot Sunday morning, I participated in Run for the Parks 4 mile race in the Central park. The temperature was over 70°F at 10:00 am. 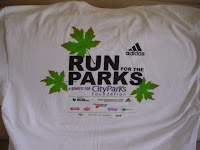 I did not plan to run this race. However, I heard that many of my running mates including Chiho and Yuichiro would run so I decided to run.
This race was another farewell run for Chiho and first one for Yuichiro.

I did not have any image of the target for the race. Only thing I tried was not to run too hard. With the NJ marathon was a week ahead I did not have to challenge my limit in this 4 miler. 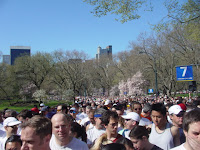 It was not bad.

The first mile was so crowded with the runners who were much slower than I. So I have to weave through them and lost 10 to 20 seconds. It could not be helped. It was the Central Park…

So if I tried to run my best race in this course, I should line in front position as possible of the starting area. Also I should run the third mile in the pace not slower than five seconds than other miles. I would like to run within 25 minutes in some races this year.

After the race, we gathered to say good-bye to Chiho and Yuichiro.
We took a picture in front of the cherry blossoms. It was like a typical graduation picture in Japan. 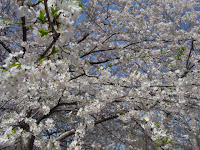 LSD in the Rockefeller States Park

On a beautiful Saturday morning, I went to the Rockefeller States Park. I headed to Tarry town by Hudson line of the Metro North, from there my running friend picked me up to take me to the park. 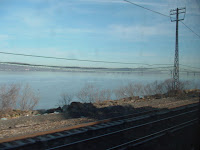 I ran the trail course in the park with other six running friends.
We gathered there to run with Chiho, who was supposed to leave NYC to Japan next week with her husband, Yoichiro. It was a farewell run for her. She stayed 2 and half years in NYC. It is usual for Japanese people in NYC to go back to Japan after there assignment periods are done. Most of them stay only 3-5 years in NYC.

Chiho was one of the first running friends I had. We saw after a half marathon race in Queens April of last year. Before I saw her and other friends, running was lonely act for me. I trained alone and ran races alone. However, after I knew them I realized that I could obtain something to share with other guys through running. It made big difference on my running life.

We ran about 15 miles trail course in 2 hours and half.
The course was so beautiful and full of up and down; it was pretty good training course.
Actually we did not realize that we ran so long time and so long distance. It was easy to run speaking with friends, especially with running friends.
With best weather, best course and best friends, I thought that it was one of the best and forgettable run ever. 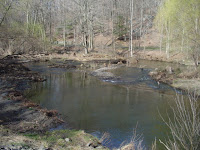 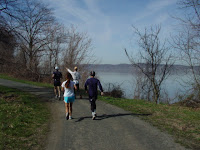 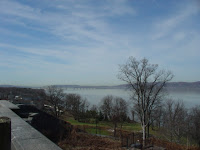 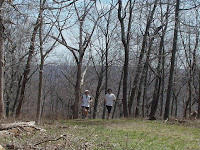 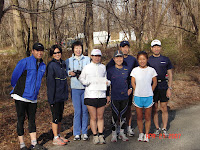 4/17(Tue)
I participated in the running class by NYRR as usual. It was raining and chilly evening.
There were less runners than usual participated in the class. Because it was the next day of the Boston Marathon those who ran there were not there.
The course of the day was along the east edge of Manhattan along the East river. We ran from 81st Street to the bridge at the 106th street. It was 1.25 miles course. We ran through there three times.
I was not fully recovered from last Saturday’s half marathon in Brooklyn. So I felt so tired after the first one and was not sure I was able to do next two runs. But I did.
The time of each run was 7’52”, 7’45” and 7’40”. The average pace was 6’13” per mile. I managed to keep up with other runners and ran through three laps. It was a good exercise.

NJ Marathon is 9days ahead.I will run 12 miles tomorrow and run 4miles race on Sunday and taper the training mileage next week to ease my fatigue.
Posted by Oke-san at 9:38:00 PM No comments:

I ran half-marathon in Brooklyn last Saturday. It was my second one of this year. 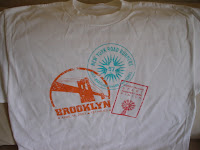 The race is one of the NYRR Half-marathon Grand Prix, which consists of 5 races in 5 boroughs in NYC.

It was so beautiful day. The temperature was 41F. It was the best day for a running race. 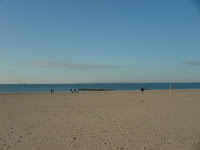 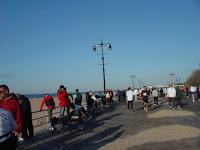 The course was from the Boardwalk of the Connie Island to the Prospect Park.
As I saw it, there were two points to care along the course; first 3mile and last 4miles.
The rest of the course was so flat and straight.

The first 3mile was on the Boardwalk. At the start line, there were almost 5,000 runners, and the Boardwalk was narrow. So if I lined up back of the crowd I would loss a couple of minutes.

The last 4miles was in the Prospect Park. There ware some uphill there. The first one was so long and tough to run after 10miles at race pace. So I kept in mind that I should save some energy for the hill.

It is the fiscal year end closing season. It is the busiest time for me.
I was not able to have time for running on Monday and Tuesday. I cancelled the running class for the first time in this session.

Today I managed to come home early and started to run from 7:45pm.
I ran around the whole loop of the Central Park.
The sun had just settled. It was cloudy and the temperature was 45F°.

I'm not very sure I have time however I would like to run 40 miles in this week. I have 34 to go.

4/5(Thu)
I ran in the morning before work. It was the first morning run after the NYC marathon.
I jogged around the 4-mile loop of the Central Park. I finished 4 miles in 34’20”, mile 8’35” pace.
Running in the quiet park with hearing birds’ singing, morning run is my favorite.

4/7(Sat)
A walk off home run by A-Rod made the worst game into classic game. Today’s Yankee game was exciting. The bad news was Igawa and Matsui…
I ran after returning to home from the game. I jogged around the whole loop of the Central Park at brisk pace. I finished 6 miles in 44’41”, 7’27” per mile pace.

Tuesday is NYRR running class day.
I participated in the class as usual by taking a day-off to watch the game.

It was a nice weather day today, however it was a little cold at 6:45pm when the class began.

Today's menu was 2 x 2 mile run in the Central Park.
We started at a small bridge close to the entrance at the Columbus Circle. And run north to the 72th street cutoff. Turn right at the cutoff to the East Drive. Turn right again at the East Drive and run south along the drive to the goal in front of the Tavern on the green.

I participated in the Scotland Run 10K race in the Central park.
Today it was overcast, the temperature was 45°F at 10:00 am. It seemed that rain was about to start. It was a little cold morning. 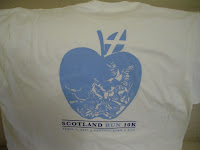 My weekly mileage is 34.8, 0.2 short of the target. It is fine.
Scotland Run is one of the events of the Tartan week, which is a Scotland promotion event held in Manhattan from 3/31 to 4/14, built around Tartan day of 4/6.
This morning 5,717 runners were cerebrated by bagpipes. Some runners wore kilt skirts. 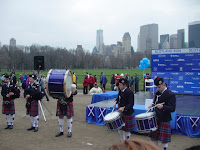 Fortunately I had minimum time loss in the first mile today. And I did not run too fast in the second mile, in stead I found the pace smoothly.
The toughest part of today’s course was the north hill, which was from the last half of the third mile to the first half of the fourth mile. It was tough as I expected however I ran very well both in the uphill and downhill.
The fifth mile and six mile were also tough, but I had enough stamina to keep under 6’30” per mile. It was first time for me to run at that pace in the last mile.
I think today’s race was one of my best races. I am so satisfied with the result. However, I would like to break 40 minutes; two seconds… 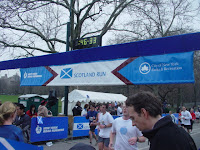