skip to main | skip to sidebar

I could not wake up that morning. So I ran from 6:30pm.The temperature was 84°F. It was so muggy evening.I ran whole loop of the Central Park. I finished the loop in 45'56"; 7'39" per mile.
I was drenched in sweat during the training.

I joined the running class by NYRR as usual.
It was slightly raining. It was better than the muggy weather of the day before. And due to the rain, there were fewer runners than usual.The menu was 1mile run x 3. We started from the east drive at E6801 pole and head south to the marathon goal.I did each lap with 6'02', 5'59", 5'59".
Actually I wanted to run the last lap faster; around 5’55”. But there were not faster runner I could follow, so I leaded the group; I could not push myself enough.

I ran in the evening after watching the Yankee game at the stadium.
The temperature was 79°F. It was not cool, but I got used to hot weather after the training of this week.This day, I ran 2 whole loops of the Central Park. I finished 12miles in 1:46’00”; 8'50" per mile pace. I did slower pace than usual.

I ran in the morning for the third time in this week. It is good news.
It was a little chilly this morning. The temperature was 62°F.
I finished 4miles in 33'49"; 8'27" per mile pace.
I felt fatigue from the speed work of the day before and slowed the pace.

I started this week's training with 5.1 miles run in the morning.

I ran in the morning before I left to work. I started to run on 6:00am.
I don't remember when I did so last time.

The temperature was 68°F. I felt sleepy but enjoyed the morning in the Park.

It was beautiful day. I started my training just after the noon; it was hot. The temperature was 85°F. I thought that it was too hot to run 12miles. But I took water often and controlled the pace to finish 12 miles successfully.

The bad news was I ran only 17 miles. The good news was the pain in my shin was eased during the unexpected rest.

Next week's target is 30 miles again.

After the race on last Sunday, I felt slight pain in my left shin. I thought that maybe it was one of the typical injury of runners, shin splint.

According to the Bob Glover's book, the causes of the injury are "tight clf and hamstring muscles; muscle imbalance- weeknesses in the fron of the leg compared to the back of the legs; running too high on toes; overstriding; leaning forward while running; running shose that are inflexible or have heels that are not thick enough; sudden change from soft to hard surfaces; slanted surfaces; sudden changes in mileage, speed training, or hill running".

For my case, the speed training with a new running shoes should have been the one. On 5/31 I did speed work by NYRR with my new shoes. I did so because I would like to run the Sunday race with that shoes. Usually I use insoles for my running shoes to support my arches. However, I misses to use them at the speed training. The shoes are for light racing shoes with thin heels. I felt very slight pain after the speed work. So I used the insoles at the race. But it might be too late. That is the story.

I tried to run on Wednesday. But I felt storonger pain and stopped the training after 10 minutes. I decided to take a rest for couple of days.

And I tried again today. I ran around the Reservoir of the Central Park. I did three round of it, which was 4.8 miles, in 37'50". The average pace was 7'53" per mile.
I focused my attention on my thin. If it hurts, I should stop and take another rest maybe one more week; such rest could make it impossible for me to try PR in my next race in July.

And it was fine. I felt slight stiffnes but no pain. On wednesday, it was defnitely a red signal. Today it was a yellow. I was relieved so much to realize that I can keep training for my next target.

I jogged to the start line as usual and got sweaty when I got to there. The temperature was 71°F, but it was a muggy morning today.
Today I participated in the Japan Day @ Central Park 4mile race. 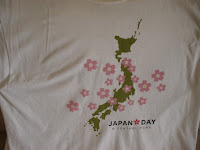 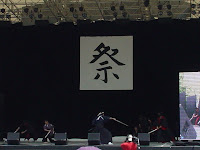 I was supposed to run 10miles today in the morning.
However, I was not able to get up early. I started my training on 12:30pm.
I ate steak and drunk a glass of brandy last night, maybe that was why I woke up late.

As soon as I started to run, I found that it was too hot and the sun was too tough to for me run 10 miles. So I stopped after I finished 5.1 mile loop. The time was 42'31". I realized that I was not ready to run in summer condition.

It was another beautiful day and another hot day.
The temperature of the afternoon might be over 90°F.

But it was eased to around 70°F at 7:00pm, when the NYRR running class began.
Today's menu was interval at the slope in front of the Tavern on the Green.

We started at 60th street of the west drive of the Central Park and ran to north to the Marathon goal in front of the restaurant. It was around 600y course. A set was made of rush at the uphill and easy jog at the downhill. We did six sets.